FEATURE ON EDUCATION:Meet Principal of Joel Omino school who has pioneered Education for Sustainable Development{ESD} in Kenya. 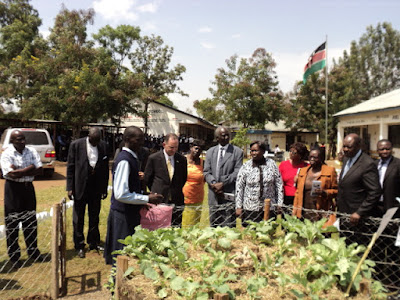 Principal Joel Omino Secondary school in Kisumu{in a gray suit} and Kisumu Governor Jack Ranguma{R}accompany the then Israeli Ambassador to Kenya Gil Haskel to have a glimpse at the school's food tower during the official launch of Education for Sustainable Development project in July 2013.The school has pioneered the project across the country and a number of schools are visiting the institution to learn about the project-Photo By DICKSONODHIAMBO/The Citizen Voice.

WHEN he received an invitation from MASHAV, an Israeli’s Agency for International Development Cooperation in September last year with an aim of going to participate as a presenter at an event organized by the Israeli Government, little did he know that this was going to be a platform he was to share with renowned world leaders who converged at the United Nations Headquarters in New York City in the United States.

This is non other than James Aggrey Otieno, a Principal of a little known day secondary school within Kisumu Central Sub-County of Kisumu County in Kenya which is implementing Education for Sustainable Development{ESD} since the year 2013 when it was launched by the then Israeli Ambassador to Kenya Gil Haskel on July 23, 2013 in a ceremony that was pomp and colorful.

The school’s Principal was invited to an event in New York City dubbed “Israeli Innovations and Technologies in African,” where he gave a presentation on the importance of Education for sustainable Development last year  September.

The event which was hosted by the Permanent Mission of Israel to the United Nations was attended by among other dignitaries Israeli Prime Minister Benjamin Netanyahu,Rwandan President Paul Kagame his Ugandan counterpart Yoweri Museveni among other world leaders.

Otieno says the school has been greatly honored and the country at large for the implementation of the ESD project which has been very successful in its implementation three years down the line since it was launched.

He says so far the ESD Program has shown tremendous progress in the school and has greatly influenced other schools which have started implementing it on a serious note.

During his presentation in New York, the 58 year-old Principal gave a very good example of an ESD project within the school named Food Tower and other projects as part of the Education for Sustain able Development {Project} and this greatly impressed the audience present including the Israeli Prime Minister Benjamin Netanyahu among other dignitaries.

He says the school has fully embraced the concept of ESD to enable the students be well equipped with knowledge in Citizenship, development and democracy.

He says the school also strives to drive the concept of ESD to its students so as to embrace environmental conservation, religious and Cultural Values as well as conflict resolution.

The school head says the scenario is strongly reinforced by five pillars of Reduce, Reuse, Recycle, Refuse and Repair {the Five Rs}. 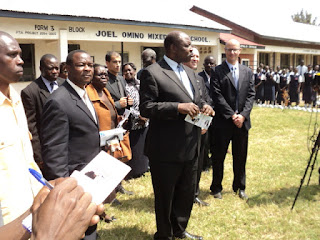 Kisumu Governor Jack Ranguma address the guests during the Launch of Education for Sustainable Development{ESD}-Photo By Dickson Odhiambo.

“These philosophies have been in cooperated into the regular curriculum thus making our school to be the first Education for Sustainable Development in Kenya here,” the School’s Principal says.

A part from the Food Tower at the school, the other important aspect of the ESD noted is the Bio-sand water filter where there is an aspect of producing clean drinking water which is sieved through sand put in super drum and this has worked so well.

There is also a traditional hut which is located at the main entrance where that the artifacts and other items that exhibit culture and traditions of the local community are exhibited.

“The Traditional hut within the school also serves as a conference room which hosts all our meetings including BOGs, PTA and Staff Meetings among others as well as hosting high profile Guests,” says the Principal,

Some of the high profile guests the school has hosted in the Traditional hut include the immediate former Israel Ambassador to Kenya Jacob Keidar and his successor Gil Haskel and Kisumu Governor Jack Ranguma.

Otieno adds that under the new concept, there is also an aspect of food security which the students are also taught to embrace and apply it once out of school after the O level Education.

“We are also creating awareness on food Security in the following areas school Nutritional Garden, the food tower, sheep rearing, Poultry keeping and the school bakery that is purely run by our
students,” he further adds.

On the issue of environmental conservation, the Principal says the school has a well maintained green lawn which is the product of Joel Omino Green Global Revolution and Scouting Club, adding that the project provides a variety of plant species which are planted within the school compound on various occasions and seedlings donated to the community periodically.

The school also has its arboretum which is a micro-Park with varied plant species which also hosts the bird feeding program where food left-over from are used to feeding the birds.

“This gives makes us a home of a variety of birds which are ever here for feeding hence our visitors’ ears are met by pleasant tunes from them,” he adds.

Otieno says since the launch of the ESD Program in the school, a number of schools all over the country has been visiting the school with an aim of learning the new concept.

He says the school has been very instrumental in sensitizing the students from other schools in embracing the ESD and makes it practical in their schools.

He says more than hundred schools and colleges across the country have visited the institution so as to learn about ESD and the results have been very positive. 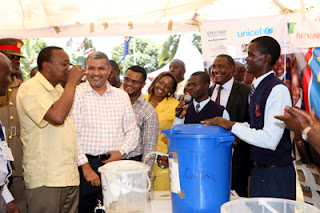 President Uhuru Kenyatta get a taste of clean drinking water from a bio-sand water filter which is project by Joel Omino Secondary school in Kisumu when the Head of State visited their stand during the Kenya Secondary schools Heads Association{KESSHA}Annual General Meeting in Mombasa in September 2013-Photo By PSCU.

Some of the schools which have so far visited Joel Omino for learning on ESD includes Nyawara Girls, Kibos school for the Physically Challenged,Rabuor Primary school among others.

“I want to sincerely thank the Government of Israel for the Education for Sustainable Development which was launched in our school in July 2013 and has been very successful and now the school has gone to New York so as to give a talk about ESD in Kenya and Africa as a whole,” Otieno concludes.

Two Kenyan Lobby Groups in US donates to flood victims in Kisumu. 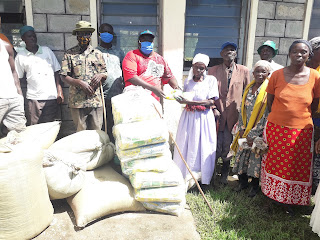 Residents of Bwanda Location in Kisumu County who are victims of flood are being given food items donated by two Kenya Lobby groups in the United States of America.Over 2,000 people will benefit from the initiative after distribution ends in four days-Photo By Dickson Odhiambo By Dickson Odhiambo April 30, 2020 Two Kenyan Lobby Groups in US donates to flood victims in Kisumu TWO Kenyan lobby groups in the United States of America has donated cash worth over 300,000 kenya shillings that has helped in purchasing food items to the victims of the raging floods that has been witnessed in Nyando constituency and other parts of Kisumu county. The Groups known as Kano Empowerment Association {KEA USA} led by its Secretary General Dr. George Anyumba and its Board Chairman Zacharia Apela teaming up with Kavirondo Men’s Group through its chairman Joab Okello and it Secretary General Enos Odera has donated an estimated shs 500,000 which has been used to purchase foodstuff to the pe
Read more 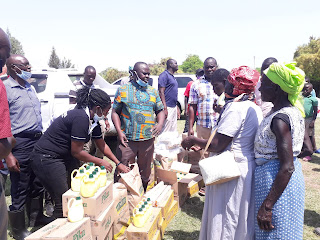 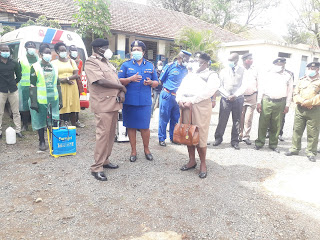 Nyanza Regional Commissioner Magu Mutindika{L} confers with the regional Police Boss Lydia Ligami during the official launch of fumigation of Police stations in Nyanza to help curb the spread of Covid-19-Photo By Dickson Odhiambo By Dickson Odhiambo   September 7, 2020 Nyanza has only four major known Police Road blocks, says RC NYANZA region has only four known police road blocks, the area Regional Commissioner Magu Mutindika has said. The Regional Commissioner says the four road blocks include the one in Migori County in the border of Kenya and Tanzania which controls the movement of people from Tanzania into Kenya. Addressing the press in Kisumu today during the launch of fumigation exercise for Police stations in Nyanza region so as to help curb the spread of Corona virus, Mutindika said other major Police Road blocks in Nyanza include the one along the borders of Western and Nyanza region near Kakamega as well as the one in Busia and Kericho that borders Kisumu County.
Read more